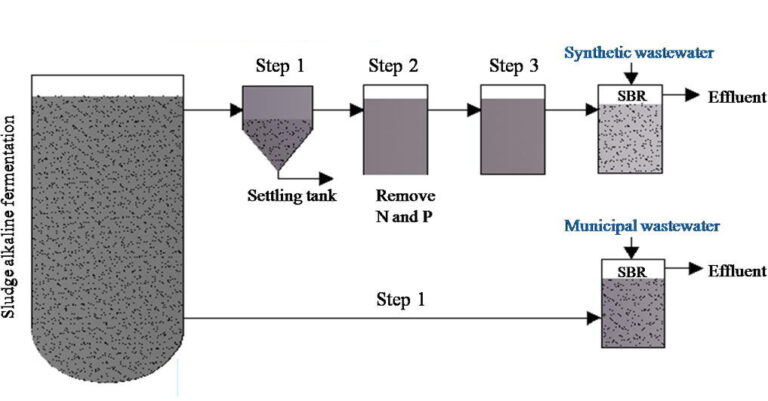 An SBR operates in a batch mode with aeration and sludge settlement both occurring in the same tank.

All the process like Equalization, Aeration and Sedimentation will take place in a single tank. Sequencing batch reactors operate by a cycle of periods consisting of fill, react, settle, decant, and idle.

The In-fluent will enter the tank through bottom distribution will contact with Microorganisms and Air was supplied for Micro organisms through Aerator and the Process of Aeration will take place until complete bio degradation of BOD and the Air blower will stop automatically depend upon the BOD load of the Influent and the same tank will act as Settling tank.

The clear liquid from the top of the tank will let out after completes settlement and the Extra Bio mass also was sent out through bottom line. During this clarifying period no liquids should enter or leave the tank to avoid turbulence in the supernatant.

The wasted sludge is pumped to an anaerobic digester or sludge drying bed to reduce the volume of the sludge to be discarded. The frequency of sludge wasting ranges between once each cycle to once every two to three months depending upon system design.

1. SBR system can be designed with the ability to treat a wide range of influent volumes whereas the continuous system is based upon a fixed influent flow rate. Thus, there is a degree of flexibility associated with working in a time rather than in a space sequence.
2. SBRs produce sludges with good settling properties providing the influent wastewater is admitted into the aeration in a controlled manner.
3. Controls range from a simplified float and timer based system with a PLC to a PC based SCADA system with color graphics using either flow proportional aeration or dissolved oxygen controlled aeration to reduce aeration to reduce energy consumption and enhance the selective pressures for BOD, nutrient removal, and control of filaments
4. . Working with automated control reduces the number of operator skill and attention requirement.
5. Lesser Foot prints.
6. . The duration, oxygen concentration, and mixing in these periods could be altered according to the needs of the particular treatment plant.

1. Appropriate aeration and decanting is essential for the correct operations of these plants.
2. The aerator should make the oxygen readily available to the microorganisms.
3. The decanter should avoid the intake of floating matter from the tank.

Fill the Form or